The flea is a blood-feeding parasite which can be transferred from host to host. However, once a host is located, the flea prefers to remain on that host until it is dislodged or dies. They are active and reproduce year-round (contrary to popular belief) but all life processes are slowed by various degrees of cold weather.

In addition to fleas biting the pets (and often people), they can also cause several related medical problems. Flea Allergy; both dogs and cats can be allergic to certain toxins in the flea’s saliva. This reaction is usually characterized by intense itching, chewing and scratching on their rear legs, tail, and upper back area. One flea bite can cause allergic reactions in sensitive animals for up to two weeks, regardless of whether a flea is still present. Any animal with hair loss should be seen by a veterinarian to determine the cause (also known as flea bit dermatitis). 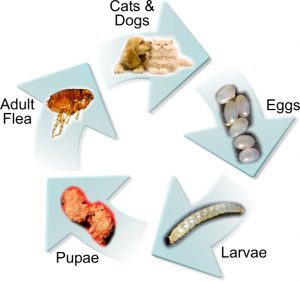 – The flea egg represents approximately 34% of the total flea population at any given time.

– They are smooth, oval, pearlescent, approximately 0.5 mm or 1/64 of an inch long, and are visible to the naked eye (a little smaller than a grain of sand).

– They hatch in 1.5 to 6 days, depending on temperature and humidity.

– Eggs are generally concentrated in area frequented by pets; i.e. bedding, dog houses, favorite resting area, etc., but can be deposited anywhere the pet has been.

– The larvae account for approximately for 57% of the flea population at any given time.

– The larvae emerge from the egg using a special “egg-buster” spine on the head. The spine is lost during the first larval molt.

– They are legless, whitish and maggot-like in appearance, having a single row of bristles on each side. They are about 3 mm long or 1/32 to 5/32 of an inch long, and are very active, using the bristles to move.

– The larvae molt through three larval instars, lasting from 6-36 days, depending on temperature and humidity. Each instar is slightly longer than the last.

– They are very susceptible to humidity, with low humidity being detrimental to the larval.

– They feed primarily on adult flea excrement, which is more less dried blood from feeding on the host. This is often called “flea dirt”, and is often mistaken for flea larvae or eggs. This is the dark specks that is seen on the animal or left behind where an infested animal lays. The larvae need this in order to survive.

– Although very active, larvae do not range far from the area in which the larvae hatch.

– Larvae avoid sunlight, hence they are more likely to be found in dark, shaded, or protected places.

– Larvae will be mainly found in the pet’s favorite resting areas.

– Accounts for approximately 8% of the flea population.

– Larvae form cocoons by secreting a stick substance and incorporating debris from surrounding areas for camouflage.

– The cocoon provides a protective barrier which makes it resistant to chemicals and pesticides.

– Pupa progress from larval form to a recognizable flea inside the cocoon.

– Development takes place in about 7-10 days; however, the cocoon will lie dormant in the environment until the outside temperature and humidity is high enough, and it senses a certain degree of vibration. A passing host subjects enough vibration for the cocoon to hatch.

– Cocoons may remain dormant over years if they are not stimulated to hatch. This accounts for the “VACATION SYNDROME”, when people and pets return to the home the vibrations begin immediately which can start a massive wave of flea emergence.

– Adult fleas only account for approximately 1% of the total flea population.

– Newly emerged fleas (from the cocoon) are often mistaken for “baby fleas” because they are very small, dark (almost black), and flat. These are merely new adults that have not yet taken a blood meal.

– Adults are wingless and range from 1/32 to 1/8 of an inch in length. They are black to brownish-black in color.

– After locating a host and feeding, the fleas “plump up” and turn a reddish-brown color, and are then recognized by most owner as a flea.

– Adults are stimulated to emerge from cocoons by vibration and changes in temperature. Daily vacuuming is recommended, discarding the bag after each use.

– Under normal circumstances the adults emerge from the cocoons in 7-10 days.

– Visual and heat stimuli are primary modes that attract adult fleas to host; carbon dioxide causes random jumping and is a minor mode of host-seeking

– Once they locate a host, fleas will feed, mate, lay eggs and spend over 90% of their lives on the host, unless dislodged.

– After emerging from cocoons, adults can live up to two years without a blood meal if they have not yet fed; feeding on flea feces, fungus, and skin dander.

– Once a blood meal is taken, the adults must feed at least every 4-6 hours.

– Feeding periods are from 4-7 minutes in duration.

– Average life span on host is about 12 days, with accounts of up to 113 days. If fleas are seen continuously on pet, this is evidence of re-infestation of new adults.

Accessibility by WAH
Call Us Text Us