From the Pet Health Library @ veterinarypartner.com 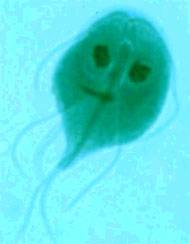 Giardia is the genus of a protozoan parasite that is infectious to both humans and pets all over the world.  Giardia consists of flagellates, which mean they move by means of several whip-like structures called flagella. They live as a form called a trophozoite, or “troph” for short, in the intestine where it causes diarrhea. In fresh fecal samples, trophozoites can sometimes be captured. They swim around in a jerky fashion characteristic of flagellates and appear as a funny face (the two nuclei form the eyes and median bodies form the mouth).

After a short period of time outside the host’s intestine, the trophozoites round up and form cysts that enable them to survive environmental conditions without a host to protect them. The cyst can be dried out to decontaminate the environment, but if it is cold and wet the cyst can live for many months with two incompletely formed trophozoites inside, ready to infect a new host.  Contaminated water is the classical source of a Giardia infection.

After having been swallowed, the cyst shell is digested away, freeing the two trophozoites who go and attach to the intestinal lining. The troph has a structure called a ventral disc, which is sort of like a suction cup, and this is used to stay attached to the intestine. If the troph wants to move to another spot, it lifts itself up and swims to a new spot via its flagella (trophs tend to live in different intestinal areas in different host species, depending on the host’s diet). If the host has diarrhea, trophs are shed in the diarrhea, but Giardia may also form cysts within the host in preparation to be shed.  Either form can be found in fresh stool.

After infection, it takes 5 to 12 days in dogs or 5 to 16 days in cats for Giardia to be found in the host’s stool. Diarrhea can precede the shedding of the Giardia.  Infection is more common in kennel situations where animals are housed in groups.

How Does Giardia Cause Diarrhea?

No one is completely sure but infection seems to cause problems with normal intestinal absorption of vitamins and other nutrients. Diarrhea is generally not bloody. Immune suppressive medications such as corticosteroids can re-activate an old Giardia infection.

In the past, diagnosis was difficult. The stool sample being examined needed to be fresh, plus Giardia rarely show up on the usual fecal flotation testing methods used to detect other parasites. Traditionally, a fecal sample is mixed in a salt or sugar solution such that any parasite eggs present will float to the top within 10 to15 minutes.  Some tricks that have been used to facilitate finding Giardia include:

What has made Giardia testing infinitely easier is the development of a commercial ELISA test kit (similar in format to home pregnancy test kits). A fecal sample is tested immunologically for Giardia proteins. This method has dramatically improved the ability to detect Giardia infections and the test can be completed in just a few minutes while the owner waits.

Giardia shed organisms intermittently and may be difficult to detect. Sometimes pets must be retested in order to find an infection.

A broad spectrum dewormer called fenbendazole (Panacur®) seems to be the most reliable treatment at this time. Metronidazole (Flagyl®) in relatively high doses has been a classical treatment for Giardia but studies show it to only be effective in 67% of cases. The high doses required to treat Giardia also have been known to result in temporary neurologic side effects or upset stomach. For some resistant cases, both medications are used concurrently; further, a study by Scorza et. al in 2004 found that Drontal® (a combination of praziquantel, febantel, and pyrantel pamoate) is effective in many cases. The ELISA test for Giardia should go negative within 2 weeks of treatment indicating success.

Because cysts can stick to the fur of the infected patient and be a source for re-infection, the positive animal should receive a bath at least once in the course of treatment.

Not all patients with Giardia actually have diarrhea but because Giardia is the most common intestinal parasite affecting humans in North America, treatment is generally recommended for the pet testing positive even if no symptoms are being shown. The idea is to reduce human exposure.

A Giardia vaccine made by Fort Dodge Animal Health is on the market but it is not intended to prevent infection in the vaccinated animal.  Instead the vaccine is licensed as an adjunct to treatment and is used to reduce the shedding of cysts by the vaccinated patient.  This would be helpful in a kennel situation that is trying to reduce environmental contamination during an outbreak or where an animal keeps getting reinfected, but it is not helpful to the average dog whose owner wants to simply prevent infection.

The 2006 American Animal Hospital Association Guidelines list this vaccine as “not recommended.”

The most readily available effective disinfectant is probably bleach diluted 1:32 in water, which in one study required less than one minute of contact to kill Giardia cysts. Organic matter such as dirt or stool is protective to the cyst, so on a concrete surface basic cleaning should be effected prior to disinfection. Animals should be thoroughly bathed before being reintroduced into a “clean” area. A properly chlorinated swimming pool should not be able to become contaminated.  As for areas with lawn or plants, decontamination will not be possible without killing the plants and allowing the area to dry out in direct sunlight.

Most people become infected with Giardia by drinking contaminated water, which typically is tap water from a contaminated lake or stream. If an infected animal is in the home, it is important for the animal to be bathed at the completion of treatment and retested to minimize the potential for reinfection of the pet and of the humans in the house. Good hygiene, such as washing one’s hands after handling the infected pet or its waste and prompt disposal of feces, is especially important in this situation.

Accessibility by WAH
Call Us Text Us